Milling is a versatile process for meeting various manufacturing needs, the machine tool designed for CNC milling is called a milling machine or mill. To produce different features and parts, multiple types of milling machines can be selected. In this article, we’ll introduce a common choice – column and knee type milling machine, and get into its definition, types, parts, diagram, and more.

What is Column and Knee Type Milling Machine?

The column and knee type milling machine is most commonly used in the machine shop, used for working on small workpieces, in this machine, you will find a vertical column is attached to the base and the knee is mounted on the guideway of the column, which allows the knee to move up and down. The column is the main supporting frame of the knee, worktable, and overarm, it also houses all the driving mechanisms for spindle and table feed. The knee gives support to the saddle on which the table rests.

1. Plain milling machine: also known as horizontal milling machine, a type of rigid and sturdy mill mainly used for machining heavy workpieces, the table can’t be rotated, and the part mounted on the worktable can move vertically, longitudinally, and crosswise against the rotating cutter.

3. Omniversal milling machine: mostly used in tool room work, can also be used for manufacturing helical grooves, reamer and bevel gears. Its knee can be tilted to a required angle, and the table movement is the same as the universal machines.

4. Vertical milling machine: primarily used to produce grooves, slots and flat surfaces. Auxillary operations like drilling and boring can also be performed. Its spindle is in the vertical direction, end mill cutters and face milling cutters are the common tools for vertical mills.

– Base: the foundation of the column and knee type milling machine, carries the column at its one end and bears all the other parts rest upon it, also acts as a reservoir for the coolant.

– Column: the main supporting part of the machine, vertically mounted on the base, comes in a box-type shape, with heavy ribs inside, houses all the driving mechanism for the spindle and table feed, dovetail guideway as the support of knee is provided on the accurately machined front vertical face of the column.

– Overarm: mounted on the top of the column, extends beyond the column and supports the other end of the arbor. It can slide horizontally, forward and backward, and adjusted at the required position for supporting the projecting arbor.

– Arbor support: additional support mounted between the knee and the overarm to ensure further rigidity to the other end of the arbor.

– Spindle: a shaft situated in the upper part of the column and receives power from the motor through belts, gears, and clutches and transmit it to the arbor.

– Arbor: an extension of the machine spindle on which milling cutters are mounted and rotated. The arbors are made with taper shanks for proper alignment with the machine spindles having taper holes at their nose. The draw bolt is used to lock the arbor with the spindle and the whole assembly. The arbor assembly consists of the following components: arbor, spindle, spacing collars, bearing bush, cutter, draw bolt, lock nut, key block and set screw.

– Saddle: placed between the table and knee, which serves as a support for the table, to provide cross feed to the table, the saddle can be adjusted crosswise along the guideway provided on the top of the knee, horizontal guideways are provided at the top of the saddle, the worktable can move along its longitudinal direction.

– Table: rests on the saddle, holds the part, and moves longitudinally, a lead screw under the table engages a nut on the saddle to move the table horizontally by hand or power. In universal machines, the table may also be rotated horizontally. For this purpose, the table is mounted on a circular base, the top of the table is accurately finished and T slots are provided for clamping the work and other fixtures on it. 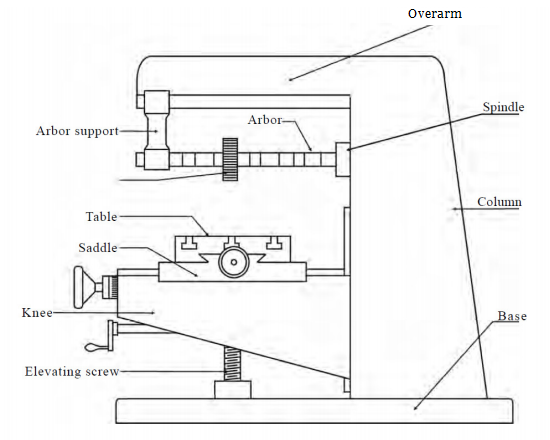 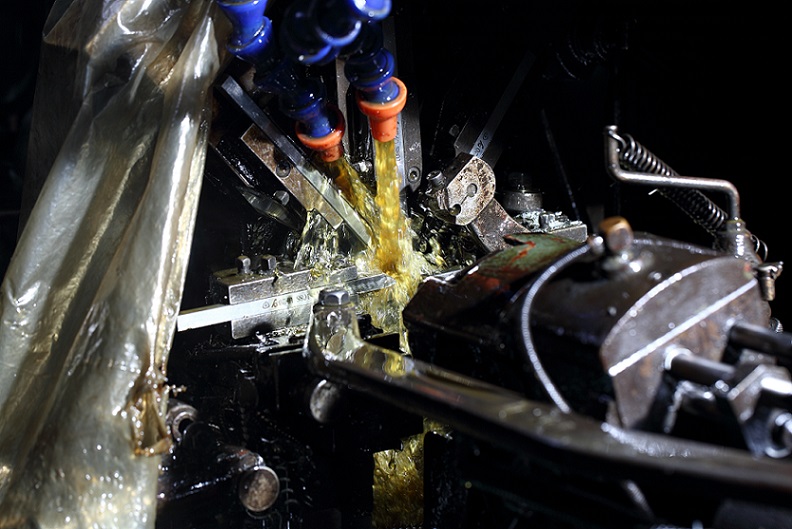 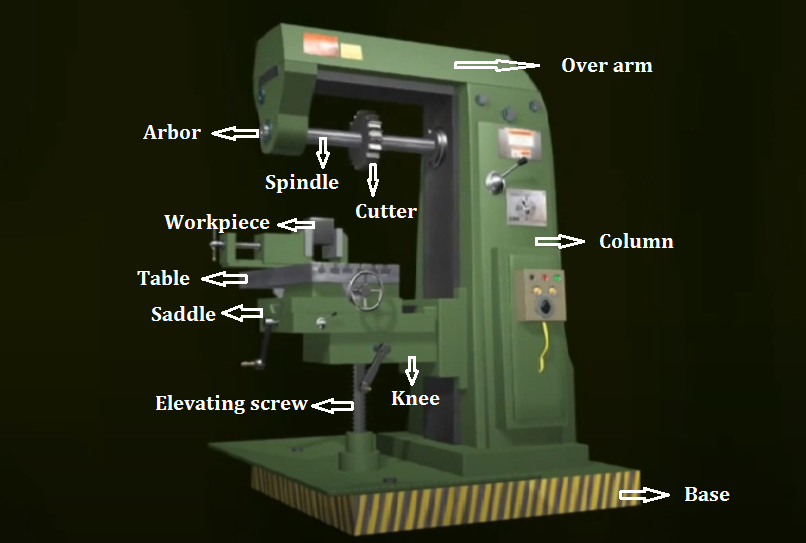 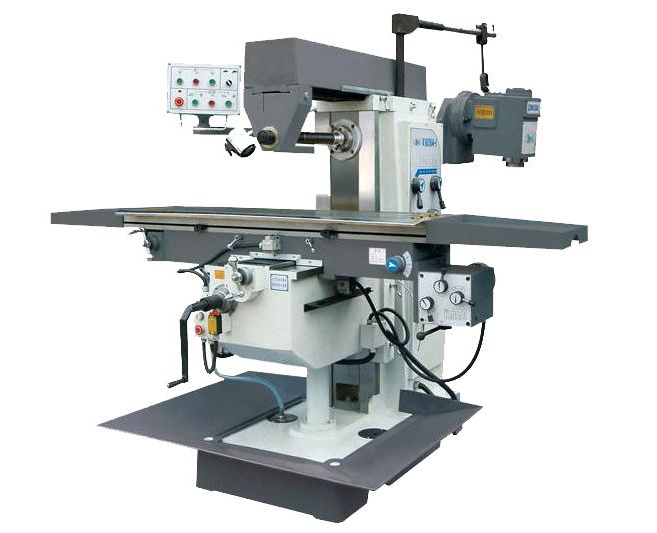 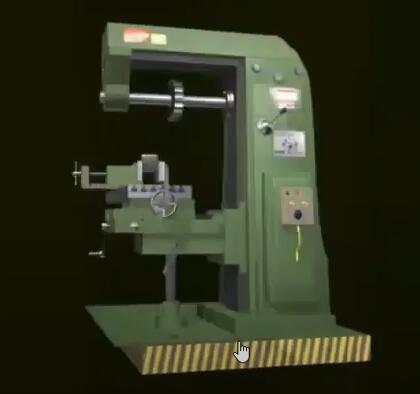 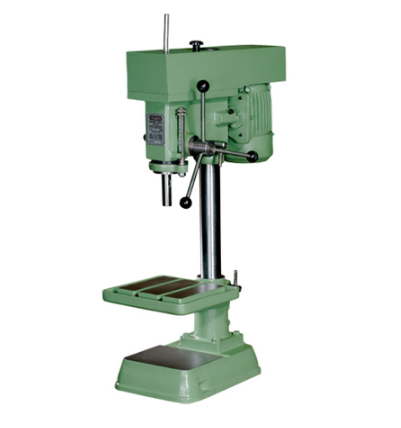 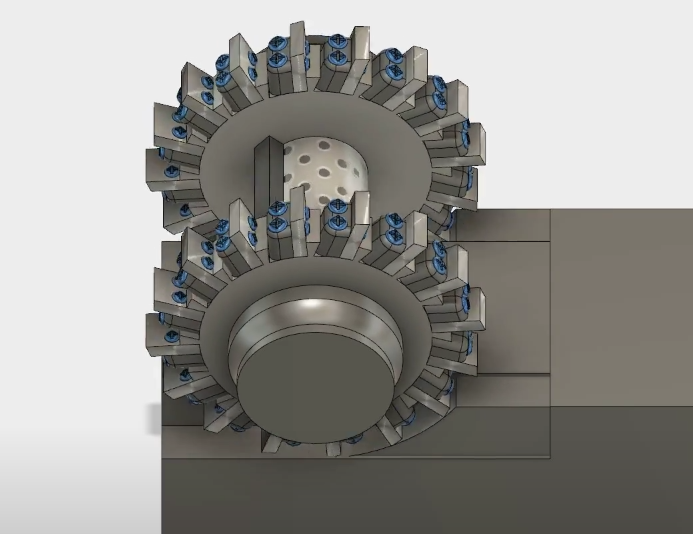 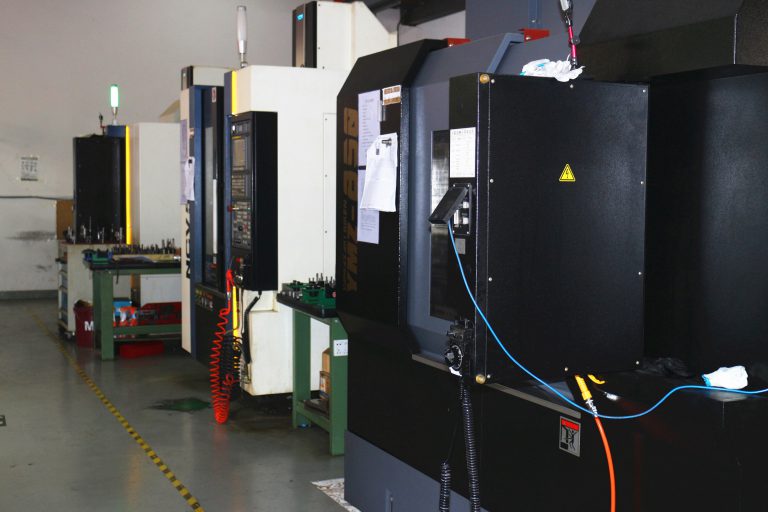